Cybersecurity Programs and Schools in Arkansas 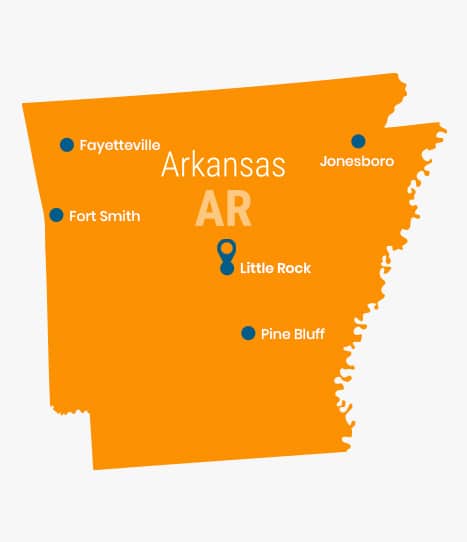 Why an Advanced Degree in Arkansas is Needed

It's always beneficial to have a degree. Employers need to see that you have completed a course of study, especially when you've focused on issues directly related to the jobs they offer. Indeed, many jobs are available only to those with certain degree types and you might find that you need the next level of academic achievement if you wish to move up in your field.

Sometimes advanced degrees are necessary for state licensure, or even for in industry certification. More often, degrees are used as markers of expertise and even status. This is even true in cyber security. After all, it is possible to learn all about cyber security without ever earning a degree.

Regardless, Arkansas employers prefer to see that you have at least a bachelor's degree to get started in the field. If you wish to excel in cyber security and eventually attain a managerial position, you will likely need an advanced Computer Science degree or an MBA.

More often than not there are few, if any, requirements for entry into a cyber security program in a community college. However, if you want to excel in your courses, it will be a good idea to enter the program with a strong working knowledge of a few programming languages, such as Python. At the associate level you are more likely to encounter courses such as networking, database management, and perhaps a few programming classes. For your electives, you should consider taking as many math courses as possible. To round out your education, courses in management or business may be helpful.

At the baccalaureate level, courses become more rigorous and the bar to enter a cyber security program far higher than it is for an associate degree. Depending on your school, you might need to apply for entry to the Computer Science department in order to pursue cyber security. Your application should probably reflect courses such as Introduction to Programming, a course on algorithms, advanced mathematics, and possibly some evidence of achievement in computer science.

To gain entry to a master's program for cyber security, you will most likely need to show that you have a related undergraduate major. Some options include Information Technology, Electrical Engineering, or Computer Science. Since there are few cyber security bachelor degree programs, you should also show that you have experience working in cyber security. On the other hand, if you are seeking a career shift into security, your application could benefit from industry certificates or additional academic coursework. Seek out courses in programming, networking, and database management. There are also many security-specific courses from various departments. You can most easily boost your transcripts by taking online courses from highly respected departments nationwide.

If you are working in an IT department and wish to take your career to the next level, you will be well-served by pursuing a certification. Companies such as Microsoft and Cisco Systems offer certifications that are product-specific, so if your workplace uses one of those you may be able to attain and maintain a certification through them. On the other hand, if your firm uses Linux, for example, you can find industry associations or even reputable online schools that will provide reputable certificates. Keep in mind that these certifications frequently require that you continue taking courses in order to keep your credentials current. If you maintain a certification for a significant amount of time, and have a bachelor's degree, you might not even need a master's degree.

It is absolutely vital that you ensure that your degree is from a fully accredited college or university. Accreditation proves that your program has been audited and found worthy of regional or national credentials. If you are employed and seek to take advantage of a tuition reimbursement program, your employer is more likely to help you if you attend an accredited institution.

For cyber security, look for programs recognized as Centers of Academic Excellence (CAE). The program was started by the National Security Agency and is co-sponsored by the Department of Homeland Security to verify that any program maintaining this accreditation has top-notch education in the cyber security field. The CAE designation is available to degree programs from the associate level through graduate school. If you graduate from such a program, your degree is sure to be respected in both the public and private sectors.

If you are itching to launch your career and want to save a little money in the meantime, Arkansas offers an array of colleges that offer certificates and two-year associate degrees. These degrees tend to yield smaller salaries at the outset, but if you work hard and continue to build your knowledge and skills, great success is very possible. Further, community colleges tend to be cheaper and still yield credits that will transfer to a baccalaureate program.

Since success in cyber security is more often measured by overall skills and knowledge than it is by your highest level of education, an associate degree may be exactly the right first step towards getting your foot in the door. The following institutions offer degrees that will help you launch a career in cyber security.

This IT firm consults with city governments to help bolster their cyber security protocols. They provide cyber security workshops in Arkansas. Most recently they conducted a workshop in Bethel Heights. If you are interested in learning from a firm that helps bolster cyber security from the smallest town to the largest metropolis, seek out Sophicity's next workshop near you.

MIT Technology Review is hosting this conference that covers a range of computing issues. The conference's speakers address topics such as Artificial Intelligence, Edge Computing, Cyber Security, IoT and 5G, as well as Next-gen interfaces. The focus is on the near-term and the technologies that are most likely to disrupt the business landscape.

This conference is one of the world's top cyber security conferences. Events are held in the USA, Australia, and Japan. In 2020, the event is in San Francisco and will cover security issues with tutorials, product demonstrations, keynote speakers, and top networking opportunities.

The salary and employment outlook for Arkansas computer science and information technology professionals is bright. On the national front, information security analysts earn a median salary of $98,000 and the Bureau of Labor Statistics projects that the profession will expand by 32% from 2018 to 2028. In Arkansas, the mean wage for this profession is approximately $81,000 and there are currently 890 professionals in the field. Other positions such as Computer Systems Analysts, Computer Programmers, and Network Administrators are also slated for significant growth in the near future.

Computer systems analysts in Arkansas are currently earning a mean wage of approximately $71,990 and fill 3,500 jobs in the state. Nationally, the profession showed a median salary of $88,740 in 2018 and is expected to grow by 9% through 2028. The BLS states the typical entry-level degree for this job is a bachelor's.

Computer programmers, on the other hand, are seeing that their profession is in a period of slight recession. Though many might have adopted other job descriptions, such as Software Developer, the BLS projects a 7% decline in the number of programmers nationwide. Meanwhile, Arkansas programmers are earning an annual mean wage of $71,000 and fill 1,900 jobs in the state's economy.

Network and computer systems administrators, on the other hand, are seeing their field grow at a steady, average rate. The BLS projects that this profession will grow by 5% through 2028. The agency also shows that the national mean salary for these professionals was $82,000 in 2018. In Arkansas, these professionals earn a mean salary of $65,000 and fill 2,000 jobs in the state.

In reviewing this jobs and salary information, please keep in mind that the national averages include salaries for professionals in places like Silicon Valley and New York City, where the cost of living is far greater than anywhere in Arkansas. Make sure you keep this in perspective.