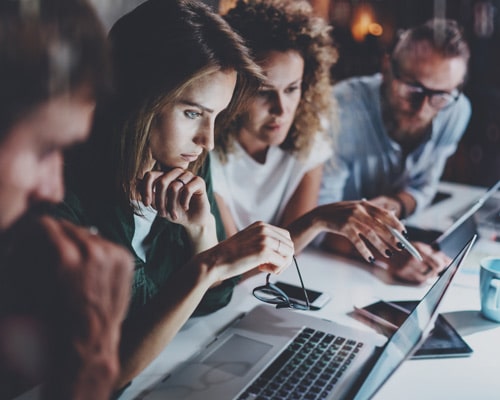 The Bureau of Labor Statistics predicts cyber security to be one of the fastest growing fields in the near future. The demand for these positions is on the rise and all business is going to need to keep their data safe from potential external and internal threats.

The CISO executive oversees cyber security systems and information security, as well as all departments associated with these systems.

These executives deal with data and physical security systems, controlling database and facility entry and all departments that deal with cybersecurity professionals and surrounding policies.

This executive deals with development and implementation of computer systems. They receive organizational reports on the use and effectiveness of tech in regards to online systems security.

Analyze computers or web-based applications in the search for forensic evidence of a crime. This is done in support of the law after commission of a crime, or in efforts to assess a network's vulnerabilities.

Cyber security risk analysts spend their time looking for systems, procedures, or malware which could cause unintended negative occurrences, such as system crashes or slowdowns. They help create procedures to fix these problems quickly if they do occur.

Cyber security administrators are responsible for dealing with all security and safety issues. They may create procedures or policies in order to maintain a companies overall security.

A cyber security analyst maintains networks and fix issues that come up during normal operation. They may also identify threats and neutralizing them as quickly as possible.

This position requires you to choose or design security elements, whether physical parts that will become a part of the system or the virtual system that will provide access to all the company's data.

Security consultants devise security plans should they experience an incursion or help companies that are just getting started set up their security system from the ground up.

A security engineer is responsible for creating computing systems which increases security and they solve any issues turned up by a security audit or incursion incident.

The security manager oversees entry level and senior security staff on a day-to-day basis, making sure staffing is steady and all issues are dealt with and reported to the highest-level security professionals.

This security specialist tests systems for vulnerabilities, much in the same way penetration testers do. Instead of performing penetration testing, they look through applications or software for possible weaknesses and data security leaks.