Cybersecurity Programs and Schools in Georgia

With over 120 cyber security companies generating over $4.7 billion in revenue, Georgia’s cyber security economy is on the rise. On top of that, come 2020, the US Army Cyber Command will move their headquarters to Fort Gordon in Augusta, bringing 4,700 high-tech military positions to the state. Georgia is becoming something of a cyber security hub. NSA Georgia already operates a 600,000 cryptologic center out of Fort Gordon and the state-owned Hull McKnight Georgia Cyber Center for Innovation and Technology offers continuous cyber training for public and private security professionals.

Aspiring cyber security professionals, whether they’re looking for a career change or weighing university options, will find no shortage of quality educational programs throughout the entire state of Georgia. Whether you’re considering a career in the US Army or prefer civilian life, Georgia is the place to be if you’re interested in anything related to cyber security, IT, or systems security. 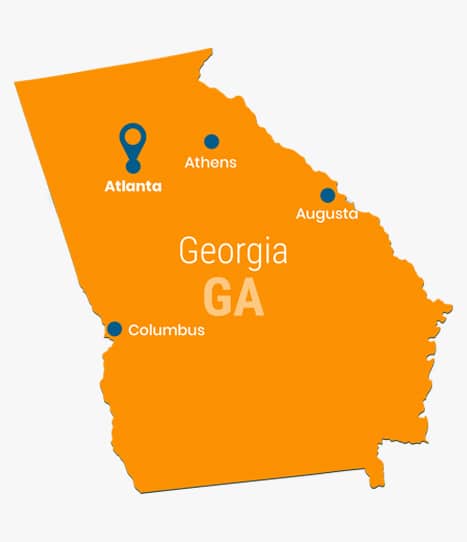 Why an Advanced Degree in Georgia is Needed

With the NSA and the US Army operating out of the state, combined with Georgia’s low corporate tax rates, the state ranks number three in national cyber security hubs. So, while there are countless opportunities for security professionals - be it in the Army, the NSA, or in one of many top private sector companies - locking down a great job can get competitive.

Cyber security and defense programs work hard to recruit, train, and retain top talent and the state has invested heavily in raising the bar for cyber security education in the university system, as well as in the $100m Hull McKnight center. Georgia is among the top ten states that have Centers of Academic Excellence (CAE) in eight GA state universities, designated by the NSA and the Department of Homeland Security.

While it’s possible to land yourself an entry-level cyber security position with an associate degree or less, with the right skills, most jobs require a four-year degree in either cyber security or a related discipline like computer science, web development, or information technology. Some training can be done on the job but experience with ethics, statistics, and computer forensics will better prepare employees for a successful career.

The cyber security environment in Georgia is a bit different than it is in some other states where cyber security degree programs and resources are hard to come by. In those states, the barrier to entry may be slightly lower, due to the high demand and low supply of security professionals. Still, earning a degree in cyber security, particularly now when this degree is relatively new, may be a smart move for new graduates entering the job market.

As data breaches become increasingly common, more institutions are adding cyber security programs to their existing lineup and those who wish to advance into leadership roles or work in a highly-specialized role may want to consider pursuing an advanced degree. An advanced degree offers managerial and leadership training and an opportunity to specialize in specific areas while also opening the door to both job security and high salaries.

At the associate level, students will explore the fundamentals of cyber security during the course of a two-year program. These programs typically cover the vulnerabilities of common hardware and software systems, network technologies, and offer a basic overview of cyber security practices like security administration and intrusion detection.

Entry to an associate degree program usually only requires a high school diploma or GED, though some, more exclusive, schools may require a certain GPA.

When to consider earning an associate degree:

The curriculum in a bachelor’s cyber security program is similar to that of a computer science degree. It begins with a foundation in programming, database applications, and statistics. Then students have the opportunity to delve into more advanced topics such as artificial intelligence, cryptography, and ethical hacking. Post-graduation, students are qualified for roles like cyber security analysts, information security analysts, and computer forensic analysts. These degrees are perfect for traditional students and students who have already earned an associate degree.

Having an advanced degree may enable candidates to achieve higher positions in their career path more quickly or advance within their own organization.

Though master’s programs vary based on your concentration and the school, typical coursework includes:

The requirements to enter a master’s degree program include a bachelor’s degree in a related discipline, certain prerequisite courses like calculus, Java, or C++, GRE or GMAT scores, and may require previous work experience.

Certification programs are designed to help working professionals advance in their careers or diversify their skillset. Certifications often take a year or two to complete and are generally a better choice than associate degrees for people who want to learn a new skill or build on their existing knowledge. For students who haven’t yet earned a bachelor’s degree, going for a certification instead might backfire, as many employers prefer candidates that have a degree.

You should consider a certificate program if you want to add credentials to your resume, want to learn new skills, or want to get hands-on professional training for a specific role. Certification prerequisites range considerably. Entry-level certifications can help you break into a career in cyber security, though you should have some background in IT before working toward a credential. Mid to senior-level certifications come with a higher barrier to entry, often requiring several years of work experience and a background in IT and cyber security. In this case, these certifications may help you command a higher paycheck or qualify for a more advanced role.

Accreditation is important because it helps determine whether an educational institution meets a certain set of quality standards. Many employers require that students have a bachelor’s degree from an accredited institution and students who wish to pursue a master’s degree will also need to have that credential before they can move forward.

If you earn a degree from an unaccredited institution, you may find that you’ve wasted a significant amount of money on an education that doesn’t help you find work or further your education. If you’re considering a career in cyber security in the state of Georgia, it’s also worth pointing out that beyond looking for an accredited school, you may want to seek out one of the state’s several institutions with a CAE designation. The NSA and DHS offer CAE classifications to schools with high quality cyber security or information security programs.

An annual cyber security training event put on by the EC-Council, Hacker Halted is designed for certified ethical hackers (CEH) and others in the InfoSec community looking to increase their knowledge. Participants will have the opportunity to network with others in the space, hear from 40+ speakers, and participate in breakout sessions. They’ll also get the chance to participate in advanced ethical hacking training sessions to increase their skills.

SecureWorld Atlanta is an annual event that offers two days of cyber security education, which amounts to between 12-16 hours of continuing education credits for certified professionals. The conference offers networking opportunities and is attended by several professional associations within the IT, IS, and cyber security industry.

A global conference for industrial control cyber security professionals, this event offers networking opportunities, panel discussions, and the chance to explore new technologies and hear the latest research in the industry.

According to Indeed, Atlanta, GA ranks sixth among US metro areas with the most cyber security jobs. Per Georgia’s official website, the state currently has about 150,000 people working in computer and mathematical professionals, including 52,000 computer programmers and software developers, 21,000 information analysts, and 44,000 engineers.

Here’s a look at some of the common job titles you’ll see in this industry, as well as the average pay in the state of Georgia.

Overall, working as a cyber security professional in Georgia means you can expect to see a salary close to the national average, though the cost of living is slightly lower than what you’d find in places like New York, Los Angeles, and Washington DC.

While the positions mentioned above tend to hover around the $65-70,000 mark, salaries vary based on educational achievement, company, and experience. Earning a master’s degree can open more doors, as can gaining specialized cyber security skills and the certifications to prove it.

The Hull McKnight Georgia Cyber Center is located in Augusta and represents a partnership between the state’s university system, the government, the US army, and the private sector to promote continuous improvements in cyber security technology through education, research, and hands-on training. The center is a resource that offers cyber security education to K-12 learners, workforce training at all levels, and a cloud-based cyber training environment for practicing skills like ethical hacking and threat hunting.

The Institute for Information Security & Privacy is a collaborative effort between the private sector, government, and Georgia Tech Research Institute (GTRI) that spans nine labs and 200 researchers working on innovations in the cyber security space.

The Center of Innovation for IT

Georgia’s Center of Innovation for IT is a resource that connects Georgia’s IT community with potential partners and research opportunities. The center also works with companies, exposing them to new markets and opportunities and facilitates collaborations between government agencies, private companies, and academia to find solutions.

Georgia is home to the nation's first FinTech Academy, a joint effort between the university system’s network of 26 public institutions and 120+ private companies. The academy was designed in response to a global shortage of cyber security workers at all levels, and it aims to prepare current college students and experienced IT pros for the unique challenges of today’s connected world.

A trade group that aims to assist in fighting the digital disruption of US companies, the National Technology Security Coalition (NTSC) is a non-partisan, public-private partnership that educates industry stakeholders, puts on networking events, and acts as an advocate for Chief Information Security Officers (CISOs) across the US.